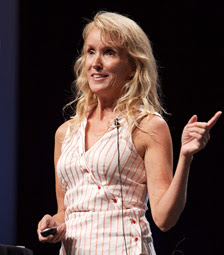 To mark Ada Lovelace Day, I’d like to ‘give props’ to Kathy Sierra, a woman whose approach to technology, learning and creativity has been a big part of my journey from historian to web developer.  As a younger woman I pursued an academic career in British gender and social history.  While I attained a PhD and was awarded a post-doctoral fellowship, job opportunities were very thin on the ground, not to mention located distressingly far from my partner.  So, in 2004 I determined that a new direction was called for, and decided to embark on a career in programming.  I should note that my partner, also from a humanities background, moved from linguistics to Java programming during the Dot Com Boom and his example was an important role model for me.

My MSc in Information Techonology was an extremely challenging year, made worse by the fact that my instructors and fellow students understood the language of numbers and took a corresponding approach to programming.  I, on the other hand, had a good grasp of logic and of natural language and the writing process, but a shockingly poor conceptualisation of numbers, symbols which continue to ‘short circuit’ my brain.  Happily, I discovered Kathy’s Head First series of Java learning guides.  The wit and humour of Head First helped me to excel in learning Java and Java for web applications; these books spoke to me in a way my instructors could not, and their innovative approach gave me an ‘in’ to the world of Java.  Kathy’s passion for best practices and technology were inspiring and key to my ability to develop the initial skill set to pass my MSc with distinction, go out into the world as a Java developer and to then strike out on my own as an Internet entrepreneur working mainly in Python.

My metamorphoses from an historian to technologist was a painful one, but Kathy’s fresh and unconventional approach to learning and her insights into Creating Passionate Users demonstrated to me in a very powerful way both that women ‘belonged’ in tech just as much as men and that working in technology was full of potential for fun and satisfying challenge.

This site tracks visits anonymously using cookies. We use this information to improve your experience of our site. You can opt-out if you choose.Accept Reject Read More
Privacy Policy

This website uses cookies to improve your experience while you navigate through the website. Out of these cookies, the cookies that are categorized as necessary are stored on your browser as they are essential for the working of basic functionalities of the website. We also use third-party cookies that help us analyze and understand how you use this website. These cookies will be stored in your browser only with your consent. You also have the option to opt-out of these cookies. But opting out of some of these cookies may have an effect on your browsing experience.
Necessary Always Enabled
Necessary cookies are absolutely essential for the website to function properly. This category only includes cookies that ensures basic functionalities and security features of the website. These cookies do not store any personal information.
Non-necessary
Any cookies that may not be particularly necessary for the website to function and is used specifically to collect user personal data via analytics, ads, other embedded contents are termed as non-necessary cookies. It is mandatory to procure user consent prior to running these cookies on your website.
SAVE & ACCEPT